Something in the Way He Needs by @CardenoC @audible_com #REVIEW #AUDIO 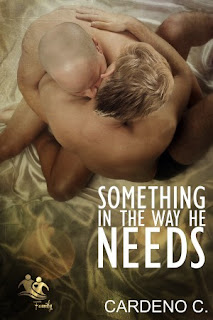 Something in the Way He Needs, Cardeno C.
Narrated by Ezekiel Robison
Controlled Asher didn't expect to fall for free-spirited Daniel, but they'll find what they desperately need in one another.

Police captain Asher Penaz’s staunch professionalism bleeds into his home life, down to his neatly pressed attire and spartan apartment. He enjoys being in charge and in control, so his sudden and powerful attraction to the lighthearted, free-spirited Daniel Tover throws him for a loop. In his entire life, Daniel has never gotten what he needs, so he moves to the next place, the next job, the next attempt to find something worth staying for, always landing at the top of his game, but never feeling like he belongs.

The chemistry between Asher and Daniel sizzles, but with all that fire comes the risk of getting burned. As both men struggle to learn themselves while getting to know each other, the lines of desire and control blur. If Daniel and Asher can walk through the flames together, they might find what they desperately need.


Audio Review:
I am quickly becoming a fan of Mr. Robison's narration. He nails Asher's growly rough deep voice perfectly, while also being able to bring Daniel's sweet seemingly lost vulnerabilities out as well. I was so caught up in the story that I wanted to reach into my radio and strangle Asher and had to remind myself that wasn't an option. Listening to Robison's reading, made Asher a bigger dick then he was when he was just in my head. And poor Oliver sounded like an adult version of Eeyore. I enjoyed this version of Something in the Way He Needs and look forward to Cardeno's and Robison's next collaboration.

RATING: 4 Chocolate-Dipped Strawberries. This audio book was given to us by the author. Many thanks. This book was READ & RATED by Tyra

Asher is a Dom with a capital D. He demands that things be done his way and likes his regimented orderly life. So he is completely taken aback by his attraction to the scatterbrained, lackadaisical, adorable Daniel. In fact he is certain that there is some sort of chemical being pumped into the Las Vegas air that is causing this attraction. Of course that doesn't explain why it's still happening once they get back to San Francisco.

Daniel has been searching all his life for that sense of family and belonging and he thinks he has found it in Asher. He loves the way that Asher controls their time in the bedroom but isn't sure the man can make room for him anywhere else in his orderly life.

I fell in love with Daniel as he wandered around oblivious in Vegas. His character was so sweet and trusting I completely understood Asher's immediate need to care for and protect Daniel. And laughed every time he was confused by these feelings.

Asher on the other hand made me CRAZY! He was all "my way or the high way" and they when Daniel did what he wanted he acted like a two year old. Don't get me wrong I like a man that is possessive but Asher took it to far and you aren't sure they can ever make it back from that point.

If you like your stories messy and your heroes flawed, then Something in the Way He Needs is a must!
RATING: 4 Chocolate-Dipped Strawberries. This book was given to us by the author. Many thanks. This book was READ & RATED by Tyra.