Learning To Trust: A Good Thing

Molto Bene! Learning To Trust by Lynne Connolly was so much more than a traditional romance. With its emotional storyline and darker theme dealing with the struggles of addiction, the book will appeal to more than your average romance reader.  And a lover of all things Italian… landscape, architecture, men, gelato… the setting of this book also enchanted to me.

Bellina Mazzanti Forde, or Lina Forde as she is now known, lived once as a socialite in NYC where money bought her anything she wanted, including drugs. On impulse, Lina and her then-boyfriend Byron Brantley decide to cut all ties with their lives and take off.  Both are heavily addicted to drugs and will do anything for their next fix until Lina was struck by a car. Having no family and friends to help her after the car accident, the nuns in Rome take her in, clean her up and care for her. Only Byron isn't ready to get clean so he leaves her. Fast-forward two years when Byron’s brother Jonathon gets a tip in his search for Byron and friend Lina. Jonathon flies to Italy to rescue his brother and take him home only to find out Lina no longer knows where Byron is. When they find Byron a few days later in the morgue, dead from a heroin overdose, suspicions arise because it's pure grade heroin in Byron's system. While both trying to discover who set Byron up, they’re forced back to NYC where family secrets are revealed and Lina discovers she’s been deceived by someone she trusted. 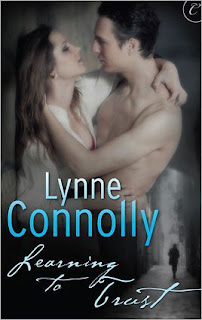 Engaging readers with real-life issues in a format that also weaves in a beautiful romance is a talent. Connolly clearly has this talent. I was struck by the poignant story of Lina’s recovery though I did wonder if those affected by addiction might have been challenged in reading this book. The cold-hearted stance Jonathan took on his brother’s death chilled me. Since he was portrayed to care for Lina so deeply, this incongruity was that much harsher. But clearly one of the messages in this book is that there is only so much a loved one can do to help an addict - a sad message for a romance novel actually but one well-written.

Connolly’s straight-forward writing style made the story fly by though it isn't a light read, the story progresses at an even pace while the reader experiences the journey along with Jonathan and Lina. Readers will find it impossible not to care for the characters in Learning To Trust.

Thanks to Netgalley for providing this book for my review on behalf of Carina Press.