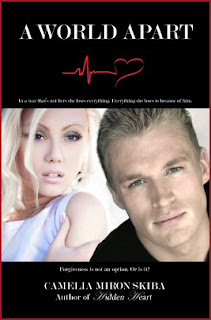 A World Apart is a compelling story that takes the reader into the struggles of two people trying to make life work during the hardships of war and the hard reality that life isn’t always easy or clear-cut.

Lieutenant Cassandra Toma is a complicated, strong-minded doctor who has had a very tough life.  Having grown up under the Communists regime in Romania she has seen her countries people suffer and struggle to break free from tyranny.  Her father fled the country when she has very young after being accused of treason.  The government came after her mother trying to force information out of her and eventually violently took her away leaving Cassandra to be forced into an orphanage.  Her sole remaining family was her older brother, by 15 years, Robert.  Robert is her world and her hero.   The story begins when she is older and is ordered by the military to be deployed to the Black Sea to serve with the American’s at a hospital there that is a support hospital to the war going on in Iraq.  At first she is very reluctant about this deployment until she learns that her brother has also been deployed to same location.   Overjoyed that he will be close by she chooses to overlook her feelings that American’s are arrogant people trespassing in her country and instead embraces the assignment, focusing on the fact that she doesn’t have much longer to serve her military duty.

Major David Hunt is a very proud and strong American doctor who lives life by a strict code of honor.  He is recently divorced to his commanding officer’s daughter and is a recovering alcoholic.  He agrees to take one last tour of duty as a favor to his former father-in-law before retiring from the military.  The Black Sea base is a strategic hospital for critical patients that are too seriously injured to make it to hospitals further away.   Upon arriving in Romania, David realizes that he has truly arrived in another world.  The culture and its people are “World’s Apart” from America.   He meets Cassandra on Valentines Day and mistakes her brother for her husband, due to them sharing the same last name and their tremendous affection for each other.  This begins the struggles between them.  Professionally their world is a constant struggle to find common ground and a glimmer of happiness to hold on to with the ugliness of war all around them.  Cassandra's rebellious nature and sassiness rival her excellent performance in the operating room while her charm and dimples leave David wanting more.  Emotionally their connection keeps growing despite David’s best efforts to keep his distance, thinking she is married.  This seemingly forbidden bound between them grows but perceptions about each other keep them apart until they reach a breaking point.  Unfortunately the truth that Cassandra is not married is a long time in coming and when it does come out the shock of the news isn’t welcomed by either one of them.  David flees to Iraq but destiny takes a hand and brings them back together with a common goal - to find Cassandra's kidnapped brother.  The story really ramps up into full wartime reality.  David’s pride and shame over previous events along with the fear of Cassandra being in the middle of wartime Iraq provides further tension between them making for greater misconceptions in their relationship.  They are both very strong stubborn characters making for a complicated road for them to navigate to find their way.

Although this book does have a happily ever after it seems to fall more into the urban fantasy style of writing.  The romance between them is a fundamental undercurrent of the entire story but they really aren’t a couple until the last chapter.  This story is more about the journey and what life is like for two strong military doctors in a wartime environment.  It takes a while to get into the story and Ms. Skiba’s style of writing.   However, once you do it is hard to put the book down.  Their struggles truly become heart wrenching and it is hard to not want to keep reading to see if it will all work out for them and the characters around them in the end.  This book paints a poignant picture of what life is like in both Iraq and in the neighboring countries.  If you enjoy military pieces then this book will not disappoint.  It is a touching tale of what our military sacrifices each day and that even in wartime love can overcome any obstacle even the stubborn honor of a stubborn couple.

RATING:  I give this one four chocolate dipped strawberries.

This book was given to us by Ms. Skiba.   Many thanks.