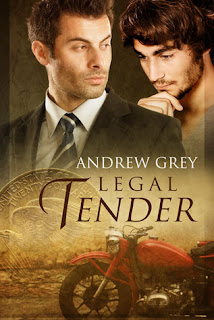 Legal Tender, Andrew Grey, Dreamspinner Press
Bottled Up # 8
Timothy left home when he was eighteen to get away from his reckless mother, but he never stopped visiting his grandfather, who taught him what love was all about. Now that Grampy has passed away, Timothy finds that the old man's legacy is everything Timothy has dreamed of—and more.
Inside the house Timothy loves so much is a cache of coins with historical value… and a mystery, because one of them isn’t supposed to exist. In memory of his grandfather, Timothy sets out to make sure that the mystery and the coins are given their due honor. In his quest to keep the government from confiscating his grandfather’s legacy, he meets Joiner, whose interest in Timothy is as clear and open as Timothy is guarded. There are things about Timothy's life and his past he doesn't want anyone to know, not even the kind man who is helping him with the complications of legal tender.


Andrew Grey's books make me feel like I have been swaddled in a soft blanket and all is right in the world. He is unapologetically romantic and I love that about him. What I love about this series is that it makes me think. There is so much research that goes into the legal aspect of these books that I always walk away feeling I have learned something new.

Timothy has inherited his Grampy's house. The problem is his drug addicted mother has been living there and he not only has to clean out the physical trash but the mental  and emotional trash as well. Just being back in the house brings up both the good and bad memories he has from growing up there.

When he comes across a bag of old coins his Grampy hid for him in his old play area in the attic he knows he will need some legal advice on how to deal with them. Especially the double eagle gold coin that isn't supposed to exist.

Joiner Carver is a new lawyer that works with Gerald (Artistic Appeal) and is eager to work on this very tricky case that his boss has asked him to spearhead. And not just because the client is cute as hell.

This story is not for the faint of heart. It is an emotionally charged love story that will leave you drained in that way that only a well written book can do. The legal aspect of the story line is so well researched it becomes a character in it's own right and really gives the book a "real life" feel.

Timothy is like a battered butterfly that Joiner has to coax out of his cocoon. He has been so hurt in the past that he has basically shut everyone else out and Joiner has to show him that he is worthy of being loved and protected. The care that Joiner shows with Timothy, especially during intimacy was beautiful to read.

There are plenty of you old favorites back with Dieter and Gerald playing an integral part in this story.  I am always happy when an author understands my insatiable need to know what happens in the lives of their previous characters and Mr. Grey is very good at weaving them into his stories in ways that that don't feel contrived.

I recommend this book to anyone who wants to believe in the healing aspect of love.


RATING: 5 Chocolate-Dipped Strawberries This book was given to us by Dreamspinner Press. Many thanks.