This week brings a new to me author, Kallypso Master. And I have to say this is the most unique prequel that I have ever read. In this novella you get vignettes on all of the upcoming hero's in the books. Let me warn you now that it is intense and emotional and deals with some very sensitive subject matter but it is very well written and sets up the next stories very well. 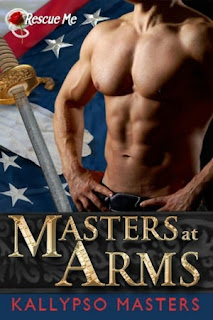 Masters at Arms, Kallypso Masters, Self Published
Masters at Arms begins the journey of three men, each on a quest for honor, acceptance, and to ease his unspoken pain. Their paths cross at one of the darkest points in their lives. As they try to come to terms with the aftermath--forging an unbreakable bond--will they ever truly become masters of their own fates? Or would fate become masters of them? (Book One in the Rescue Me series about the men who own the Masters at Arms BDSM Club.) AUTHOR'S NOTE: This is an introduction to the series, but does NOT have the Happily Ever After endings that will come in the next three romance novels in the series. Being the back-story that usually is not told in "real time," there are some intense themes in the book, including death of a spouse, incest, torture, a battle scene, and amputation.

Part 1 -Adam
Adam is a career marine, who just lost his wife to cancer. While sitting in the bus terminal waiting to head back to base after the funeral he steps in a saves a young runaway. What Adam doesn't realize is that Karla actually saved his life by giving him something to fight for again.

Part 2 -Damian
Damien is a bus-boy in a high end hotel. He has had some trouble in the past and is just trying to keep his head down and do his job. But when he hears a woman screaming in one of the rooms he can't just walk away. Finding Savannah being tortured he does the only thing he can do....rescues her. After spending a beautiful afternoon together Damian drops Savannah off at her house knowing he will never see her again but not realizing he left his heart. And so much more.

Part 3 -Marc
After Marc's Marine brother is killed while stationed in Kandahar Marc's parents aren't happy to hear he has enlisted in the Navy. But Marc has to do something to get away from his ex and his guilt. But in trying to get away from the past he runs right into it.

Part 4 -Bonds Form
They say that unless you have been there you can't really understand the bonds that form between soldiers during war. When the three men come together on a roof top in Fallujah all they wanted to do was get out alive. They may come away with some scars that will never heal but they also come away with a connection that can never be broken.


Part 5 -The Club
It's 5 years later and the men have opened a fetish club in Denver. Things are going good the club is a success and then the world gets a little smaller and some things come full circle.

I had to take a deep breath when I got to the end of this book and kind of let go of my emotions. The author is very good at evoking a response in a very visceral way in just a few pages. Not all of them are good or pretty but then life isn't always good and pretty but it is intense and real. This book is successful in that you so want to know what happens next in each of the men's and women's lives. I don't know that I could read these books back to back, I feel the emotions might be a bit overwhelming but there is no way that I am not going to read them.


RATING: 5 Chocolate-Dipped Strawberries. This book was given to us by the author. Many thanks.