Get Naked with Raine Miller

WE GOT THE CHANCE TO INTERVIEW Raine Miller.
Don't worry! We didn't take up too much of her time and keep her from writing the next book. Check it out - here's what she had to say... 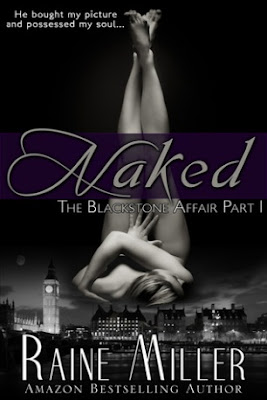 GI: When did you first decide to write erotica?
Raine: I started writing 3 years ago.  I was home on a medical leave with lots of free time and my husband and kids gone during the days.  Once I started writing it became an obsession and I could not stop.  My first book still remains unpublished but some day I hope to get it out there.

GI: We loved this book and while there were some common themes we've seen in other books lately, you took a unique approach. What was your inspiration for Naked?
Raine: I was looking on Shutterstock for an image for a cover (for another book I was working on) and stumbled upon the image that's on the cover for Naked.  I thought it was beautiful.  I just got an idea of what it would be like for the model to meet the man who bought her picture.  ...And Naked was born.  I just started writing and got the first chapter done in a couple hours.  Then it was onward and forward with the story.  It sort of took on a life of its own.

GI: In the book, your main character is an art student and nude model. Have you ever ventured into the arts or modeling? You seemed very knowledgeable.
Raine: I studied Art History in college, so yes I love the arts.  I have the painting/portrait theme running in most of my books.  Paintings always look like there is such an interesting story behind them.  I want to know, so writing a fictional account is the second best thing.

GI: What was the hardest scene you ever had to write? Why?
Raine: The hardest scene, by far, is one in my very first book.  The hero has to tell his grieving wife about the death of their premature twins, of how they were born alive and then just went to sleep as he held them.  She was not conscious during the birth and begs to be told.  He doesn't want to tell her because he knows how much it will hurt her, but she needs to know so she can move forward.  I cried gallons while writing that scene  (The book ends happy though).

GI: The elements of D/s relationships are quite indulgent. Tell us more about Ethan and Brynne.
Raine: D/s is another thread I have woven in most of my writing.  I write Dominant males.  Period.  Ethan and Brynne just click for many reasons and the D/s element is a BIG part of why they do.  Brynne has suffered some trauma that involved a sexual assault where she was tricked and unaware of what went on until a video surfaced and just destroyed her.  Ethan is very blunt and direct.  He tells her from the beginning that he wants to be with her and tells Brynne exactly what he wants sexually.  She likes that a lot.  The direct truth is very comforting to Brynne.  She knows what will happen and can decide if she wants to do it or not.  She likes that Ethan is in charge because she has little confidence in this aspect of her life.  The sex with him is explosive and by giving herself over to his care she can finally enjoy something that had been traumatic for her in the past.  Ethan is obsessed with Brynne.  He cannot help his attraction, it just is.

GI: Do you have a playlist for the book?
Raine: I do not.  That's something I should set up though.  I listen to anything and everything when I write.  From classic stuff like Jimi Hendrix to Imogene Heep.

GI: What are you working on now?
Raine: I am writing Part 2 of The Blackstone Affair. (GI: Thank God!)  It is entirely from Ethan's point of view.  The title is All In.  I've also outlined a spin-off series to follow this one.  Brynne's roommate, Gabrielle, will be the heroine in that series.


Here's an EXCERPT from Naked, The Blackstone Affair Part One


“It’s a very bad idea, Brynne. Don’t risk it. Let me give you a ride.”
I froze on the street. I knew who spoke to me without ever hearing his voice before. I turned slowly to face the same eyes that had burned me back at the gallery. “I don’t know you at all,” I told him.
He smiled, his lip turning up more on one side than the other of his goateed mouth. He pointed to his car at the curb, a sleek black Range Rover HSE. The kind that only Brits with money can ever afford. Not that he didn’t reek of money before, but he was way out of my league.
I swallowed hard in my throat. Those eyes of his were blue, very clear and deep. “Yet you call me by name and—and expect me to get in a car with you? Are you crazy?”
He walked toward me and extended his hand. “Ethan Blackstone.”
I stared at his hand, so finely elegant with the white cuff framing the grey sleeve of his designer jacket. “How do you even know my name?”
“I just bought a work entitled Brynne’s Repose from the Andersen Gallery for a nice sum not fifteen minutes ago. And I’m fairly sure I’m not mentally impaired. Sounds more PC than crazy don’t you think?” He kept his hand out.
I met his hand and he took mine. Oh did he ever. Or maybe I’d lost my mind shaking hands with the stranger who’d just purchased a huge canvas of my naked body. Ethan possessed a firm grip. And hot too. Had I imagined he pulled me a little closer toward him? Or maybe I was the crazy one, because my feet hadn’t moved an inch. Those blue eyes were nearer to me than they were a moment ago though, and I could smell his cologne. Something so gawd awfully delicious it was sinful to smell that good and be human.
“Brynne Bennett,” I said.
He let go of my hand. “And now we know each other,” he said, pointing first at me and then to himself, “Brynne, Ethan.” He motioned with his head toward his Rover. “Now will you let me take you home?”
I swallowed again. “Why do you care so much?”
“Because I don’t want anything to happen to you? Because those heels look lovely at the end of your legs but will be hell to walk in? Because it’s dangerous for a woman alone at night in the city?” His eyes flicked over me. “Especially one as beautiful as you.” That mouth of his turned up just slightly on the one side again. “So many reasons, Miss Bennett.”
“What if you’re not safe?” He raised an eyebrow at me. “I still don’t know you or anything about you, or if Ethan Blackstone is your real name.” Did he just give me a look?
“You have a point in that. And it’s one I can rectify easily.” He reached into his jacket pocket and pulled out a drivers license with the name, Ethan James Blackstone clearly printed. He handed me a business card with the same name and Blackstone Security International, Ltd. engraved on the cream cardstock. “You may keep that.” He grinned again. “I’m very busy at my job, Miss Bennett. I have absolutely no time for a hobby as a serial killer, I promise you.”
I laughed. “Good one, Mr. Blackstone.” I put his card in my purse. “All right. You can give me a ride.” His brow shot up again, and I got the sideways grin again too.
I winced inwardly at the double entendre for ‘ride’ and tried to focus on how uncomfortable my shoes really would be for walking to the Tube station and that it was a good idea to let him drive me.
He pressed his hand to the bottom of my back and led me to the curb. “In you go.” Ethan got me settled and then walked around to the street side and slid behind the wheel, smooth as a panther. He looked at me and tilted his head. “And where does Miss Bennett live?”
“Nelson Square in Southwark.”
He frowned but then turned his face away and pulled out into traffic. “You are American.”
What, he didn’t like Americans? “I am here on scholarship at the University of London. Graduate program,” I tacked on, wondering why I felt the need to tell him anything at all about myself.
“And the modeling?”
The second he asked the question the sexual tension thickened. I paused before answering. I knew exactly what he was doing—imagining me in my picture. Naked. And as weird as it felt, I opened my mouth and told him. “Um, I—I posed for my friend, the photographer, Benny Clarkson. He asked and it helps pay the bills, you know?”
“Not really, but I love the portrait of you, Miss Bennett.” He kept his eyes on the road.
I felt myself stiffen at his comment. Who in the hell was he to judge what I do to support myself?
“Well, my own personal international corporation never came through like yours did, Mr. Blackstone. I resorted to modeling. I like sleeping in a bed as opposed to a park bench. And heat. The winters here suck!” Even I could hear the snark in my voice.
“In my experience I’ve found many things here that suck.” He turned and gave me an expert blue-eyed stare.


Now we get to tell you what we loved about Naked...
here's our BOOK REVIEW
Naked was an emotionally charged and engaging read. The suspense -the mystery- propelled the story along as readers waited to discover the past connections. Pieces were introduced throughout the book that slowly began to weave together to bring readers closer to the truth but still it ends with questions... which is why readers will be hanging on waiting for the next book.

Ethan and Brynne are a dynamic couple. A simple encounter brings them together -or maybe it was something else- but nothing seems to keep them apart. They are drawn to one another. Their chemistry is off the charts hot. They are one of my new favorite couples.

Ms Miller's voice is compelling as she tells the tale of these two unlikely lovers. She provides deep characterization and an incredibly deep mood setting. The writing is tight and seamless, making the book a quick read because readers will not want to put it down.

RATING
5 Chocolate-Dipped Strawberries
This book was given to us by the author in exchange for a fair review. Many thanks.