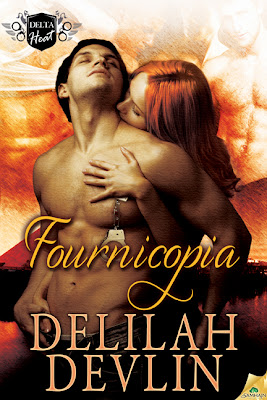 BLURB
Forget the sugar. Send her the spice.

The large, burly cop is exactly the kind of alpha guy that newly minted Domme Aislinn Darby has been dying to tie up and spank. Yet after she puts him through his paces, she finds herself eager to let him take control—something she’s never before enjoyed with a man.

Determined to find out once and for all if she has what it takes to control a scene, she orders him up for one more go. Only this time, she intends to ensure he remembers who’s in charge. She’s even willing to offer a little bribe: accept her dictates, and his reward is her—any way he wants her.

Except when it’s time for payback, it comes with several twists she never saw coming.

REVIEW
Hot and spicy, Fournicopia takes readers on a sensuous ride as a new Domme meets her match in a willingly submissive man. Aislinn and Gus fit together though one couldn't necessarily neatly pidgeon-hole them into a standard role within the lifestyle. Both contradictions - Gus being a very large Police Officer who is also submissive and Aislinn a petite pastry chef who is also a Domme - they connect immediately. Through a progression of descriptively vivid sexual encounters, their relationship develops past what may have been first intended by either of them. The story reads quickly and despite it's tight time frame, it is believable as the author uses their actions to move Aislinn and Gus through the emotional landscape of finding that one perfect person.

“There any cameras in this room?”
She gave a curt nod toward a far corner.
He didn’t look toward it. He didn’t give a damn who watched. But did she? “Mistress…Ash,” he pleaded, every muscle in his body alert and ready to act.
She shook her head. Closed her eyes. Then she glanced to the corner and signaled with a wave of her hand beneath her chin for their watchers to cut the feed.
“We alone?” he ground out.
“Completely,” she whispered, her eyes wide.
Was she feeling as desperate as he was? Gus swooped toward her, picked her up by the waist and laid her on the bench. “No more slap and tickle.”
She cupped the corners of his shoulders then glided her hands across his chest. “I’m still in charge,” she said, but without any force behind the words, like she was reassuring herself.
“Yes. You can decide whether you want me or not. But choose quick.”
She wrinkled her nose. “You’re a terrible sub.”
One side of his mouth curled up. “Not really into rules.”
“Funny, I don’t seem to mind a bit that you’re not.”
“Punish me for the lapse…later.”
Her mouth curved. “My pleasure.”
He bent and took her mouth, rubbing away the smile. Her hands framed his face. Fingers cupped his ears then bit into his lobes to hold him back.
He didn’t like the uncertainty causing her eyes to darken. “Need control?”
“I do.”
“I’ll give it. Always. Tell me what you want.”
Her chest rose and fell so swiftly, her breaths came in tiny gasps. “Undress me.” 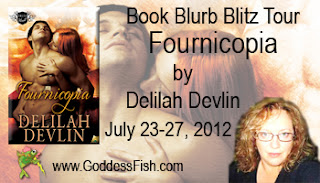