More Than Everything @CardenoC #REVIEW

Love means more than everything! 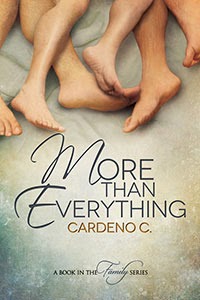 More Than Everything, Cardeno C., Dreamspinner Press
Family #3
As a teenager, Charlie "Chase" Rhodes meets Scott Boone and falls head over heels in love with the popular, athletic boy next door. Charlie thinks he's living the dream when Scott says he feels the same way. But his dreams are dashed when Scott moves unexpectedly and doesn't return.

Years later, Chase meets brash and confident Adan Navarro, who claims all he wants is a round between the sheets. When they're still together after eight months, Chase is convinced Adan returns his love. But then the time comes to be open about their relationship, and Adan walks away instead.

Time heals all wounds, but when Charlie runs into Scott and Adan and realizes the only two men he's ever loved are now in love with each other, his heart breaks all over again. Scott and Adan tell Charlie they want him back, but Charlie doesn't know if he can trust two people who have hurt him so deeply. And even if he can, why would Scott and Adan want Charlie when they already have everything with each other?


REVIEW:
So I think the first thing that made this book for me was Charlie's voice. The way the story is told from his point of view and the way that his attitude comes through, drew me in and had me falling in love before the end of the first chapter.

Charlie is the kind of guy that I would love to have in my life. He is funny and talented and a great friend. He is strong and doesn't take shit from anybody, even if that person is someone he is in love with. Each break-up that he goes through broke my heart a little more.

Scott is the perfect first boyfriend. He is popular and athletic and completely loyal to Charlie. When he leaves, you understand why and that this is first love and they are both young, so you don't expect it to last. Reading it as an adult, you know that distance at that age isn't going to work, but it's still hard to read.

Now Adan is a complete DOUCHE! LOL I hate to say that but damn I HATED him. Charlie forgave much easier than I did. I appreciated his drive but hated that the cost was Charlie's heart.

This book will take you through everything, every emotion and thought and feeling in the best possible way. If you enjoyed the first two books in the Family series then adding this book to your library is a no brainer and if you haven't read the other two, then stop what you are doing and read them now. You will thank me in the end. These books reaffirm that the best family is the family that you pick yourself and that when you are offered a second chance, take it!

Cardeno is one of those authors that has become and auto-buy for me in a very short period of time. Fabulous stories and unforgettable characters are in every book!

RATING: 5 Chocolate-Dipped Strawberries.  This book was given to us by the author. Many thanks.