Saturdays with Sid: Handle with Care

Haaaayyyyyy y’all!  It’s Saturday and that means …
Saturdays with Sid
Like Tuesdays with Morrie but with more kink 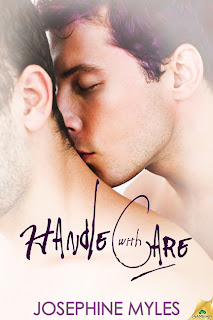 
The best things in life aren’t free…they’re freely given.Ben Lethbridge doesn’t have many vices left. After raising his little sister to adulthood, he wasted no time making up for the youth he lost to responsible parenting. Two years of partying it up—and ignoring his diabetes—has left him tethered to a home dialysis regimen.He can do his job from his flat, fortunately, but most of his favourite things are forbidden. Except for DVD porn…and fantasizing over Ollie, the gorgeous, purple-haired skateboarder who delivers it.Their banter is the highlight of Ben’s lonely day, but his illness-ravaged body is the cruel reality that prevents him from believing they’ll do anything more than flirt. Not to mention the age gap. Still, Ben figures there’s no harm in sprucing himself up a bit.Then one day, a package accidentally splits open, revealing Ben’s dirty little secret…and an unexpected connection that leaves him wondering if he’s been reading Ollie wrong all this time. There’s only one way to find out: risk showing Ollie every last scar. And hope “far from perfect” is good enough for a chance at love. 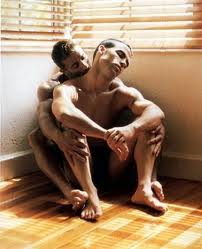 “Hey there,” Ollie said when I opened the door, that million-watt grin lighting up his face again. “Like the hair. Got another one of these for you.”“Thanks.” I tried to kick-start my mouth into saying something interesting, but it refused to cooperate and decided it wanted to dry out instead. I suppose it was slightly less embarrassing than drooling over him. In an effort not to stare, I forced my gaze away and fixed it on the front garden next door. There was only a low, brick wall separating my spartan, gravel driveway with Mrs. Felpersham’s garden, but it was like another world over there. She’d crammed it full of blowsy pink flowers, a wooden wishing well and more garden gnomes than you could shake a stick at. Those gnomes always gave me the heebie-jeebies, but at least there were plenty to keep my eyes occupied at times like this.“Oh, sweet! I’ve got that exact same T-shirt! ’Course, mine’s a bit smaller.” Ollie started bouncing up and down on his heels, and I wanted to lick him all over, he looked so appealing. At that thought, despite being full of dialysate, I felt my cock starting to stir. It’s a good thing I was in the XXX-Large version of the Wolverine shirt. Still, I leant forward a little just to make sure nothing showed.My mind got stuck on the idea of how much I wanted to see him in that T-shirt and then out of it. I started to worry that I was going to blurt it out by accident, so I kept my mouth firmly shut. I must have looked like a right stuck-up twat. Didn’t seem to bother Ollie, though.“I should bring some of those comics round for you to read. It would be good to have someone to chat about them with. Most of my other friends think I’m nuts, you know?”What? Other friends? Did that mean he considered me a friend? We’d only known each other for a few weeks. I realised I needed to speak, and fast, if I wasn’t to make a terrible impression and get struck off that friends list.“Yeah, uh, great. I mean, I’d like that, if you don’t mind lending your stuff to a stranger.” Great. Now I’d called myself a stranger when he was trying to be friendly.“Nah, it’s cool. I know where you live, after all.” He gave me another huge grin that made his cheeks dimple. It really wasn’t fair. No one should be allowed to be that cute.

Everybody go pick up “Handle with Care”, grab your l’il self a cappuccino and dive in.  4 Strawberries Dipped in Chocolate for Miss Myles!  Carry on, sister! And a great big thanks for sharing your book with me so I could share my review with everyone else.
Sid

English through and through, Josephine Myles is addicted to tea and busy cultivating a reputation for eccentricity. She writes gay erotica and romance, but finds the erotica keeps cuddling up to the romance, and the romance keeps corrupting the erotica. Jo blames her rebellious muse but he never listens to her anyway, no matter how much she threatens him with a big stick. She’s beginning to suspect he enjoys it.