Denying Yourself by Silvia Violet 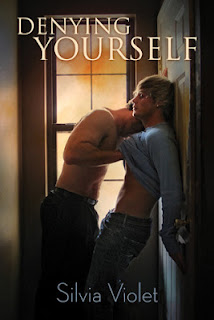 Denying Yourself by Silvia Violet
Matt and Shane both have secrets. Matt never believed he was anything but straight, yet he’s increasingly attracted to his best friend. Shane is comfortable with being gay, but when he discovers he’s part werewolf, he hides that part of himself, fearing Matt’s reaction. Suffocated by his uptight parents and conservative hometown, Shane begs Matt to run away with him.

But starting over doesn’t help. Matt still denies his desires, and Shane abuses alcohol to dampen his wolfish urges. When Matt breaks down and kisses Shane, the pent-up passion proves too much for Shane’s self-control, and his wolf gets free. Horrified, Shane flees—into deeper trouble. Before they can hope to accept each other, Shane and Matt must accept themselves.


REVIEW:
I knew as soon as I saw the cover for this book that I had to read it. I just didn't know it was going to break my heart. I don't know that I have read a character that needed to be loved like Shane did.

Shane is adopted and has never really felt a part of anything...and this was before he told his parents he was gay. Moving to a small town and refusing to hide his sexuality didn't help his feeling of loneliness, until he meets Matt.

Matt is one of the good guys and his friendship with Shane means everything to both boys. Matt is as far in the closet as Shane is out but that doesn't diminish the bond that the two share.

When Shane shifts in the middle of an argument with his parents and realizes that they never told him he might be a shifter he decides to leave but he knows he can't make it without Matt. When Matt agrees to leave Shane is sure that Matt is finally ready to admit he has feelings for him. When that doesn't happen things start to spiral out of control for Shane.

The self destructive actions that Shane takes to try and not only numb that pain of rejection but to also try and control his wolf are intense. While both boys are struggling with accepting their identities Shane's actions are much more damaging.

This book may be a  paranormal but the feelings of self loathing and denial not to mention the addictive personality traits are very real. Shane could be any teen today struggling, looking for approval and love.

This is an emotionally intense story about self acceptance.

RATING: 4 Chocolate-Dipped Strawberries.  This book was given to us by Dreamspinner Press. Many thanks.