What's better than a new book from one of your favorite authors....a book co-written by two of them! 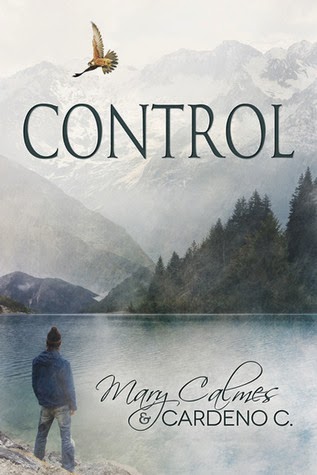 Control, Mary Calmes & Cardeno C., Dreamspinner Press
Vy Aleknos is the leader of a hawk shifter flock. Openly gay since he was a teen, Vy is proud and self-assured on the outside, while secretly worrying he’ll be forced to spend his life alone because two males can’t be mates. When bear shifter Robert Cimino appears in Vy’s small town, Vy realizes his concerns were unfounded — he has a male mate, and a sexy, dominant one to boot.

Robert is a bear shifter who refuses to shift. Immediately attracted to Vy, he deviates from his normal pattern and seeks more than a one off with the powerful, bristly hawk. But Robert’s affections are rooted in his human form, and when Vy discovers Robert doesn't recognize him as his mate, he pulls away. If Robert wants to stay with Vy, he must convince a man deeply ruled by his animal instincts to give their relationship as humans a chance.


REVIEW:
So let's face it, you had me at written by Mary and CC, talk about a great paring! I am a big fan of both authors and was excited to read this story, and now that I have I am hoping for more.

I will admit I wasn't sure I was going to like Vy at first. He kind of gave me whiplash with his mercurial mood swings. He annoyed me with his whole "I am the kuar of my ket let me beat on my chest to prove how manly I am" attitude at first. It took me a while to warm up to him, but by the end I loved this characters strength and dedication.

Robert was interesting and watching him change and grow throughout the book was wonderful. He comes off as a player, who basically just hits it and quits it, but it didn't take long to realize he really wanted so much more. That, even though he wouldn't shift and went through great lengths to control his bear nature, he still had those "bear" tendencies.

What a great cast of secondary characters. From Vy's dad who made me want to jump and and cheer to Robert's parents who made me want to pack a bowl and share it with them. But I have to say my favorite by far was Vy's second Louisa "Lou" Maberti, short, tough, caring and can totally kick your ass! With an interesting, eclectic mix of townspeople there just has to be more stories waiting to be told.

Well written, fun, kick ass action and smokin' hot sex! This one is definitely going on my keeper shelf.

RATING: 5 Chocolate-Dipped Strawberries.  This book was given to us by the author. Many thanks.