To Touch You by @CardenoC #REVIEW #AUDIOBOOK 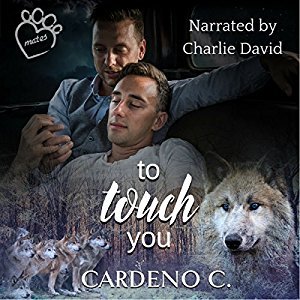 To Touch You, Cardeno C
Mates #4
“His name is Salvatore Rossi. He’s a vampire. And he’s my true mate.”

By not relying on anyone except himself, Salvatore Rossi escaped a dead-end existence and reached the height of corporate success. But just when he has everything he always wanted, fate throws Salvatore a challenge he can’t solve alone and a young wolf shifter comes to his rescue.

Since childhood, Yoram Smith’s family was certain he would grow to become Alpha and save their beloved pack from its slow demise. When the time comes for a new leader, Yoram is forced to juggle his duty to care for a splintering pack with his duty to care for an absent mate, and his own strength suffers.

Being turned into a vampire didn’t alter Salvatore’s life philosophy: if you don’t rely on anyone, nobody can let you down. But when the boy who saved his life becomes a man who needs his help, the icy vampire must find his humanity.

Audio Review:
I am a fan of this series, and appreciate the way the author has connected each story. She has a way of pulling you into the story and making you forget about the world around you. Add in Charlie David's narration and I was completely taken away.

The meeting between Yoram and Salvatore is almost as cute as Zev and Jonah's from Wake Me Up Inside. Yoram knows at 7 that Salvatore is his, but human Salvatore doesn't understand why the strange boy insists they are friends. It may take 20 years before the couple actually come together but when they do it makes for the best kind of AWWWW moment.

This world that Cardeno C has created is as flawed as real life, but she finds a way to make it a better place.

Charlie David's voice is mesmerizing and adds depth to the story. You can feel Yoram's need to care for his mate and his pack, and the confusion that Salvatore is feeling about the situation in which he finds himself.

A great listen to warm you up during the colds days.

RATING: 4 Chocolate-Dipped Strawberries. This book was given to us by the author.