Inherit the Sky by Ariel Tachna

So baseball's opening day is this Saturday and I am running around like a chicken with my head cut off trying to get everything for the concession stand and get things organized. We have a new hot dog machine and a new cheese dispenser for nachos and I have to type up instructions for how to use and clean these items for the evenings that I am not at the ballpark....which believe me are few and far between. Now you might think this would be easy, but believe me it's not, because 10 people will read those instructions and each of them will have a different interpretation. LOL Thankfully I had a fabulous book to read during those few precious moments when I had some downtime and wasn't coughing so hard I thought I was going to throw a lung. (don't ask I am three weeks into this cough and two z-paks down with no relief)

I found a new to me author, I know I was shocked to, I thought I had read everyone. LOL Well this may have been my first book by Ariel Tachna but it will not be my last. This was a beautifully written story set in the Australian Outback, and after reading it I know I am so not ready to move to a sheep station, no matter how hot the men are there. 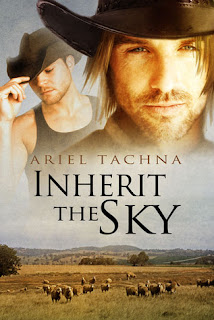 Inherit the Sky, Ariel Tachna, Dreamspinner Press
Caine Neiheisel is stuck in a dead-end job at the end of a dead-end relationship when the chance of a lifetime falls in his lap. His mother inherits her uncle’s sheep station in New South Wales, Australia, and Caine sees it as the opportunity to start over, out on the range where his stutter won’t hold him back and his willingness to work will surely make up for his lack of knowledge. Unfortunately, Macklin Armstrong, the foreman of Lang Downs who should be Caine’s biggest ally, alternates between being cool and downright dismissive, and the other hands are more amused by Caine’s American accent than they are moved by his plight… until they find out he’s gay and their amusement turns to scorn. It will take all of Caine’s determination—and an act of cruel sabotage by a hostile neighbor—to bring the men of Lang Downs together and give Caine and Macklin a chance at love.


Caine is in a dead end job, so when he finds the opportunity to move to Australia to take over running a sheep station after his great uncle passes, he jumps at the opportunity. He doesn’t know the first thing about how to do the job but he knows he needs to do something to shake up his life.

Macklin is the foreman at Lang Downs and he is not happy that some blow-in is coming to take over and possibly ruin, or worse, sell the only home he has ever known.

If the two men can learn to trust each other they may both end up with everything they not only want but need....each other.

If I had to sum up this book into one word that word would be COURAGE.

It took so much courage for Caine to leave behind everything he knew and move to another country just to try and make something happen in his life. Caine is an unbelievably strong character that I enjoyed reading and seeing him grow from a stuttering, insecure man  to the confident, self assured man that he becomes.

Macklin's character had the furthest to come. Being the foreman he had to have the respect of all the men on the station or everything would fail. I understood his reluctance to not only enter into a relationship with Caine but to come out of the closet. He had the most to lose if things didn't work out between he and Caine. While there were times I thought I was going to get whiplash from his back and forth treatment of Caine it read very true for the situation.

There are several colorful secondary characters to draw you even deeper into the story line. These characters bring life to the story and give it a more rounded thought out feel, which I think makes the story even richer.

Ms. Tachna's descriptive writing  will pull you into the book and give you a very realistic feel for life on a sheep station. Her narrative will allow you to "see" the grasslands and "feel" the bitter cold of the Outback without becoming cumbersome.

Inherit the Sky is a well crafted, beautiful book that I would recommend to anyone looking for a love story that takes courage. Here's hoping the author decides to revisit Lang Downs, because this is one reader who is ready to go down under again.

RATING: 5 Chocolate-Dipped Strawberries.  This book was given to us by NetGalley. Many thanks.