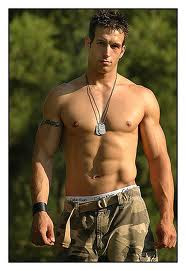 Greetings and salutations - we surpassed the humpday mark and made it to Weekend Time!  Woo hoo!  Of course, it's so dang hot - so take my advice - throw your kids outside, send your sweeties to the movies and settle down in the cool AC with a frosty beverage and gobble up one of this week's fabulous salutes to our favorite troops!  Cat Johnson's Red, Hot and Blue series will have you saluting and fanning yourself simultaneously!  And in case you need a wee bit more incentive - check out some eye candy......Mmmmmmm Yes, sir!

Contest alert!!!!!  Comment to win and fall in love with a Few Good Men of your own!

He has met the enemy…but he’s never fought desire like this. 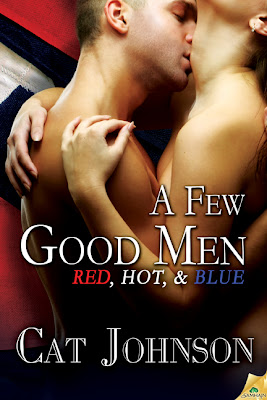 Deployed in the deadliest place on earth, Army Staff Sergeant John Blake relies on caffeine, adrenaline, years of training and sheer force of will to get through his days. He has no problem with his tank crew passing around a sexy romance novel, but John’s a fighter, not a lover. He’ll pass. Winding up as the author’s accidental pen pal wasn’t in his plan, but there’s something about her sweet, caring emails that has him looking forward to checking his inbox.


Gradually, the emails between the war-hardened warrior and the writer of passionate prose heat up to the point of keeping them up warm and wanting at night. Soon they’re wondering if it’s possible to build something solid out of cyberspace, or if it’s just an emotional mirage that will dissolve in the heat of reality.


Warning: Contains some steamy phone calls from the war zone and one hell of a sexy first meeting between two strangers who are already in love.

It's RED, HOT & BLUE FEATURE WEEK with one of our favorite authors, Cat Johnson!

ENTER OUR CONTEST TO WIN YOUR CHOICE OF A BOOK FROM THE SERIES.

Cat Johnson has been a long time favorite of mine - I actually read this series in e-book when it was originally released in trilogies several years ago. The original idea of novellas that lead into other stories made each story that much stronger and the characters that much deeper because there were references to previous characters (This applies to Trey, Jack, Jimmy, Jared, Cole and Bobby). A Few Good Men is actually a new one in this military series with (squeals of joy) more to come in the next year!

The characters themselves, both main and secondary, are so very real and human, it is easy to forget you are reading a book and not hearing about a story or reading an email from a friend. In fact, it is easy to become as obsessed with the building romance between Maureen and John as the pair are with one another. This pair's imperfections make them believable. However, it is John's strength and dedication to his service and Maureen's genuine kindness and support of our troops fighting far away that makes the reader want to leap inside this story with complete abandon and cheer for their HEA. As romantic as it is sexy, this military romance has this Cat-fan hoping to find a Few Good Men of her own (or just one, not picky, although it might be hard to choose among the heroes she has created!!)


RATING: FIVE Chocolate-Dipped Strawberries
This book was given to us by author. Many thanks.

An excerpt from
A FEW GOOD MEN

Jazzy had been alive when the medevac helicopter took him away, but now that John knew he would be fine, he was pretty sure he wanted to kill him.

John ran his hands over his face. “Why can’t you wait to email her when you get out of here?”


“Because the docs say I can’t leave this hospital bed for almost a week, and then I have to go straight to my bunk and not move for another week except to go to the head. So you have to do it. I can’t be wandering around the MWR. I might collapse and injure myself.” He held a hand to his ribcage and looked pitiful.


“Look. I have no problem calling your wife for you. Hell, I’ll even contact your grandmother and dear old aunt if you want, but I am not emailing your sex-writer pen pal, Summer Winters.” John was sticking to this resolution even though Jazzy was giving him the hurt puppy eyes.

He watched the man in the bed before him shrug and then wince in spite of the large number of painkillers John knew was coursing through his veins. The areas covered with white gauze bandages outnumbered those without, making the concussion and contusions seem worse. But John was well aware that with explosions it was the internal injuries that could kill you, no matter how good or bad the exterior looked.

“That’s okay, sir. It’s not like I got injured following an order you, my superior officer, gave me or anything—oh wait. It is exactly that.” Jazzy couldn’t suppress the grin that crossed his lips.

He was trying guilt now? Dammit, though, it was the truth. Jazzy had been out of that tank and in harm’s way following his order.

John growled, a low rumbling sound of frustration and defeat. “I really hate you right about now. You do know that, don’t you?”

Jazzy smiled wider. “Yes, sir. And might I add you’re not the first superior officer I’ve had say that. So her email address is summer at summer winters dot com. Do you want me to write that down?” Jazzy picked up the pad of paper and pen he kept on his bed so he could write his wife daily.

“No, thank you. I believe I can remember that very complicated address.” John scowled until his lips formed one tight line.


Don’t miss the rest of The Red, Hot, & Blue Series

Red Blooded
(a print compilation of Trey, Jack and Jimmy)

A Prince Among Men (Book 9)

Smalltown Heat
(a print compilation of Jared, Cole and Bobby)