Down and Dirty by @Rhys_Ford @dreamspinners #REVIEW

To celebrate the release of my new book, Down and Dirty, I’m inviting you to follow along with blog tour serial of a Cole McGinnis case, Dirty Minds! Enter to win a giveaway at every site!


To Enter Comment below. Winner to be chosen randomly.

It was a very simple plan.

I’m not sure where it went wrong. But when it did, it went to shit in a spectacular fashion.
That actually could be what I used as a motto on my family crest; Go to shit spectacularly. Also provided I lived long enough to actually have a crest…or a family.

Bobby and I started off well enough. Parking his truck down the block of our end location was standard. The last thing we wanted was for someone to connect his license plate to a pair of guys lurking about a house that’d seen better days.

Phillip Nactor — or Popcorn, if I went by his street name — lived in a not-yet gentrified section of rundown houses near Lincoln Park. The area was shoved up against older homes with trimmed hedges and whirly plastic pinwheels dotting pristine tiny lawns. A single stretch of cracked asphalt separated a middle-class blue collar neighbourhood from its seedy, rode-hard cousin, a tangle of streets pockmarked with junkyards, cheap knock-offs being sold out of the back of a car and houses worn down to their wooden bones.

Since we’d left Bobby’s truck on one of the safer looking streets, we’d done a quick jog across four lanes of traffic and found ourselves standing outside of one of the saddest looking adobe houses I’d ever seen in my life.

As homes went, it was a sad one. At some point in its long distant past, the block-shaped house boasted a bright pink exterior. Years of Los Angeles’ brutal sun and the dubious distinction of being built a few feet away from a two-story warehouse gave the adobe an odd case of paint-vitiligo. Bleached nearly white in spots along its western face, the rest of the sides were mottled with hues running from Barbie to raspberry lemonade and every shade in between. If the pink weren’t bad enough, the city’s recent rain splashed up waves of silky dirt onto the house’s lower trim, lacing its lower two feet in an ugly milk-washed coffee stain. A padlocked chain link fence ran high around the house’s yard, stretching up nearly six feet where it wasn’t bowed in.

“That is what they call a shithole, Princess,” Bobby said, studying the house from the weed-speckled sidewalk running a broken line down the short street. “Should have brought a tank or something and just knock this place down to the ground.”

“Hey, take a look at this.” Something bulky sat on a cement slab next to the house, an irregularly shaped monster hidden under a blue tarp.

After coming up between the house and the nearby warehouse, I ducked my head down to peer through the fence’s mesh links at what was underneath. Stripped of its tires and resting on stacks of cinder block, a sparkly purple car winked at me from under pool-water plastic.

“Definitely the car,” Bobby agreed, peering over my shoulder. “And take a look what’s over there behind that tire.”

Two bright yellow eyes shone out at us from the darkness, the cat’s triangular head marked with a distinctive patchwork of ruddy and amber fur with a blaze of bright orange streaking down his nose.  A rumpled twisty-tie bow dragged down from his collar but I could make his name out plain as day on the heart-shaped tag hanging from the collar’s metal loop. Slightly dusty and sporting a painfully tangled mane, Sam blinked when Bobby called his name, mewing hoarsely as it began to crawl out from under the car.

“Watch for anyone. I’m going over.” We’d already seen the gate’s heavy chain and padlock. Without cutters, there was no way we were going to get in and sure as hell not without bringing charges down on our asses. Sam mewled again but stopped short of emerging from his Monte Carlo canopy.
“Just be careful, Princess. God knows what’s over there.” Bobby warned. “I’m going to see if I can’t get that padlock loose. Maybe you can squeeze out the front instead of coming back over. Going to be shit to do holding onto a cat.”

I scrambled over the fence as best I could. Still bruised up from my encounter with street and palm tree, it was slow going when I got to the top. I ached along my ribs and the battered fence wasn’t strong enough to hold my weight. It swayed on its moorings, its pipe structure groaning and bending in as I tried to keep my balance. Landing on the Monte Carlo wasn’t going to happen. From what I could see, a promise and prayer were holding it up on its cinder block nest and I couldn’t risk crushing Sam beneath the car’s metal frame.

Hooking my hands over the top pipe, I swung down and prayed as I landed hard on the cement below. Ignoring the pains echoing across my sides, I lay on my stomach to coax the cat out. Mewing in his five-pack-a-day voice, Sam stuck his head out and I stretched out to hook my fingers under his thick red collar when I noticed the air’d gotten heavy and damper since I’d laid down on the ground.
I turned my head, catching the size of the canine’s shadow stretching across the cement floor next to me and sighed. Looking straight into Sam’s eyes, I murmured softly, snagging my fingers into his scruff. “Okay, kid. Hold on. This is going to be one bumpy fucking ride.” 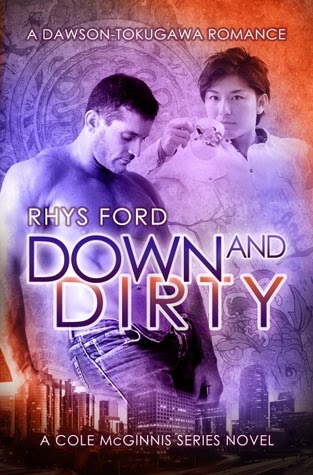 Down and Dirty, Rhys Ford, Dreamspinner Press
Cole McGinnis #5
From the moment former LAPD detective Bobby Dawson spots Ichiro Tokugawa, he knows the man is trouble. And not just because the much younger Japanese inker is hot, complicated, and pushes every one of Bobby’s buttons. No, Ichi is trouble because he’s Cole McGinnis’s younger brother and off-limits in every possible way. And Bobby knows that even before Cole threatens to kill him for looking Ichi’s way. But despite his gut telling him Ichi is bad news, Bobby can’t stop looking… or wanting.

Ichi was never one to play by the rules. Growing up in Japan as his father’s heir, he’d been bound by every rule imaginable until he had enough and walked away from everything to become his own man. Los Angeles was supposed to be a brief pitstop before he moved on, but after connecting with his American half-brothers, it looks like a good city to call home for a while—if it weren’t for Bobby Dawson.

Bobby is definitely a love-them-and-leave-them type, a philosophy Ichi whole-heartedly agrees with. Family was as much of a relationship as Ichi was looking for, but something about the gruff and handsome Bobby Dawson that makes Ichi want more.


REVIEW:
DANG I just knew Bobby and Ichi were going to be HOT!

I have to say that I was surprised by some of the things we learned about Bobby's life. I knew he was going to have secrets, but I was not expecting them to be so painful. No wonder he was a playa. And let me just say that if his son had finished that sentence I would have found a way to crawl into that book and smack him myself.

Poor Ichi had it harder than Cole growing up. I just want to grab those boys up and plunk them down into the Morgan family so they can see what familial support feels like. I don't know who would win the "NOT Father of the Year" between their two dads.

I love the way the seem to heal each other. They both come into it with some deep hurts but the foundation they build is strong and loving.

A great addition to the series and I can't wait for the next one! 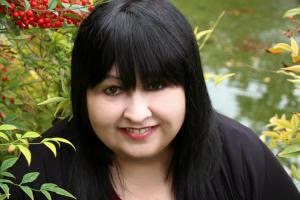 About Rhys Ford
Rhys Ford was born and raised in Hawai’i then wandered off to see the world. After chewing through a pile of books, a lot of odd food, and a stray boyfriend or two, Rhys eventually landed in San Diego, which is a very nice place but seriously needs more rain.

Rhys admits to sharing the house with three cats of varying degrees of black fur and a ginger cairn terrorist. Rhys is also enslaved to the upkeep a 1979 Pontiac Firebird, a Toshiba laptop, and an overworked red coffee maker.

And at the Starbucks down the street. No really, they’re 24/7. And a drive-thru. It’s like heaven.

My books can be purchased, folded and first chapters read at Dreamspinner Press. http://www.dreamspinnerpress.com