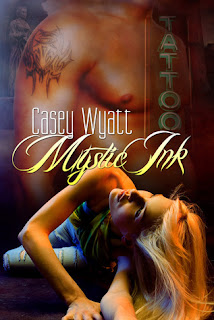 Nix, thoughts still swirling in her mind, headed toward the side door. After she unlocked the deadbolt, her eyes automatically went to the dumpster. Nothing. Thank the Gods. Her sigh of relief was quickly sucked back in. A dark shape further down the alley caught her eye. Maybe it was a heap of clothes or a bag of garbage. Whatever it was, it was lying near the entrance of the Underworld Gate. The Gate was invisible to all eyes, except Guardians—like her, Hades, and Charon. Whoever or whatever was back there couldn’t have known how close they were to the Underworld.
“Hell. Now what?” Please, be trash that some rude asshole left in my alley.
Rather than kick it with her foot, she decided to be more prudent and find something long to use as a poker. While grabbing a shop broom inside, she registered how quiet the place was. Of course, Basil wasn’t there. He was still with Jason.
Back in the alley, Nix slowly approached, straining for a better look. The pile was inside the building’s shadow. The closer she got, the more the lump resembled a body. She cursed. “Oh, come on! Why does this keep happening?”
Broom at the ready, she gave it jab. The mass was solid and there was no crinkle of plastic. So much for the garbage bag theory. Man, she did not want to have to call the police. At the rate she was going, they would probably arrest her just on principle.
Stupid mound.
She lifted the broom, ready to strike. An arm sprouted from the pile and shot up, stopping the handle from falling.
Nix barked, “What the hell?”
The broom clattered to the ground.
A dark figure rose up. The set of the shoulders, the short black hair . . . it was awfully familiar. “Cal?”
“Nix,” he said, his voice strained and tired. His arm extended, propping his body against the brick wall.
“If this is your idea of a joke, it’s not funny.” When he didn’t respond, Nix came up behind him and placed her hand on his back. “Are you—”
The words choked off. There was something wrong. Really wrong. His energy, the essence of his life, was out of whack. Like he was missing . . .
She put her hand up to her mouth, swallowing dread as he turned to face her. “Cal, where’s your soul?”


REVIEW
Having grown up nearby to Mystic, Connecticut and being a fan of paranormal romance, I just had to read Mystic Ink. With this mix of the paranormal world co-existing in the small coastal town of Mystic, Casey Wyatt crafted quite a cast of characters for her debut novel. One of my favorite characters is Basil, the talking parrot who repeats everything he hears and offers some of the best humor.

I was hooked from the very beginning with the constant adventure and intrigue (it took me most of the book to figure everything out which I found made the book even more interesting). Readers will experience solving the mysteries surrounding Nix and Cal, the two main characters, right alongside them.

Nix thought she was on vacation from her job as a supernatural destroyer (there’s a lot of mythology base – you’ll have to read to sort through them on your own). She is running her uncle's tattoo shop when dead bodies start showing up in the alley next to her shop and since her uncle is now missing, Nix has to deal with it. She’s more than capable as the bad-ass heroine full of spunk with enough strength to back up her sassy attitude. Loved her!

Cal, her protector, is deliciously sexy and fiercely protective. Cal knows more about Nix than she knows about herself (her memory gets erased after each mission) including the not-so-minor detail that they were an item at one time during their long lives. But none of that matters when his soul is stolen and Nix has to save him. The tension (sexual and otherwise) between the two is palpable from the very beginning and builds fluidly without taking over the entire story. These two are great fun as a couple.

Wyatt’s writing is sharp – her book extremely well-written – with good pacing and constant action. There was never a chance to put the book down as I flipped from page to page to find out what happened next. There was a lot going on, with many, many characters and oodles of plot twists leaving readers a bit dizzy. It just nearly hangs on the verge of being too much. But it’s all good stuff. I enjoyed solving the mystery alongside Nix and Cal.

RATING: 5 Chocolate-Dipped Strawberries
This book was given to us by the author. Many thanks.

Visit Casey on the web: www.caseywyatt.com or at http://secretsof7scribes.wordpress.com/.
You can also find Casey on Facebook and Twitter (@CaseyWyatt1).
If you want to leave comments here for the author, she will try to respond.

BUY LINK
Mystic Ink can be found atwww.soulmatepublishing.com and at Amazon and Barnes & Noble.