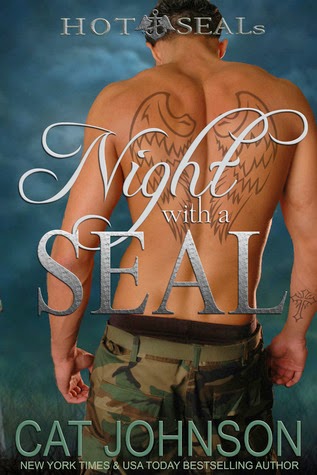 Ten years of dedication to the Navy taught SEAL Jon Rudnick one thing—he’s not afraid to risk life and limb for his country. But when navigating military red tape begins to present more challenges than the enemy it makes Jon question his future. So does Alison Cressly, the woman he can’t get out of his head.

When Ali’s life is threatened and military rules won’t allow him to intervene, Jon decides it’s time to take back control.

A team of sexy SEALs, a terrorist threat, and an attraction that can’t be denied . . . it all comes together in this launch of the new Hot SEALs romantic suspense series from New York Times and USA Today bestselling contemporary romance author Cat Johnson.

Cat Johnson has become this reader's go-to gal for military genre romance.  She portrays her heroes with respect and dignity, while reminding us why we love a man in uniform!    Night with a Seal, the lead in to her new romantic suspense series, introduces readers to a new group of Alpha males to swoon and sigh over. And even better, this particular story is one of a dozen amazing military romances bundled for sale on Amazon later this month (did I mention it was $0.99!!!!!).

Jon and Ali were an interesting choice for the kick off of this series.  Jon is classic military: squared away, focused on the job, all about the team.  But a July 4th party at a former teammates house gives him a glimpse of what life on the outside might look like. Something he'd never considered before meeting Ali.  Ali had heard all about her friend's brother and his teammates but never suspected the "set up" Darci intended would be "the One".  The thing about military life - timing is key.  And Jon and Ali have some issues with timing....thankfully not with chemistry!  Hoo boy - fan and ice water time!

The Seal team members will obviously be the heroes of future books in this series - and they are a wild bunch!  Great secondary characters and intense story lines promise each and every story will be filled with all the action and passion Cat Johnson is known for.  For those of you who haven't read Ms. Johnson, do yourselves a favor and grab a copy and go to town this Fourth of July!  And those of you who know....what are you waiting for?  Hot Alpha Seals, indeed!  (Pre-order your copy - what a steal!!)

RATING: 4 Chocolate-Dipped Strawberries!  This book was given to us by the author. Many thanks.

CONTEST: Leave a comment for a chance at an ebook copy from Cat's Red Hot & Blue series or her self pub military eBooks (Crossing the Line, Cinderella Liberty) from her backlist. 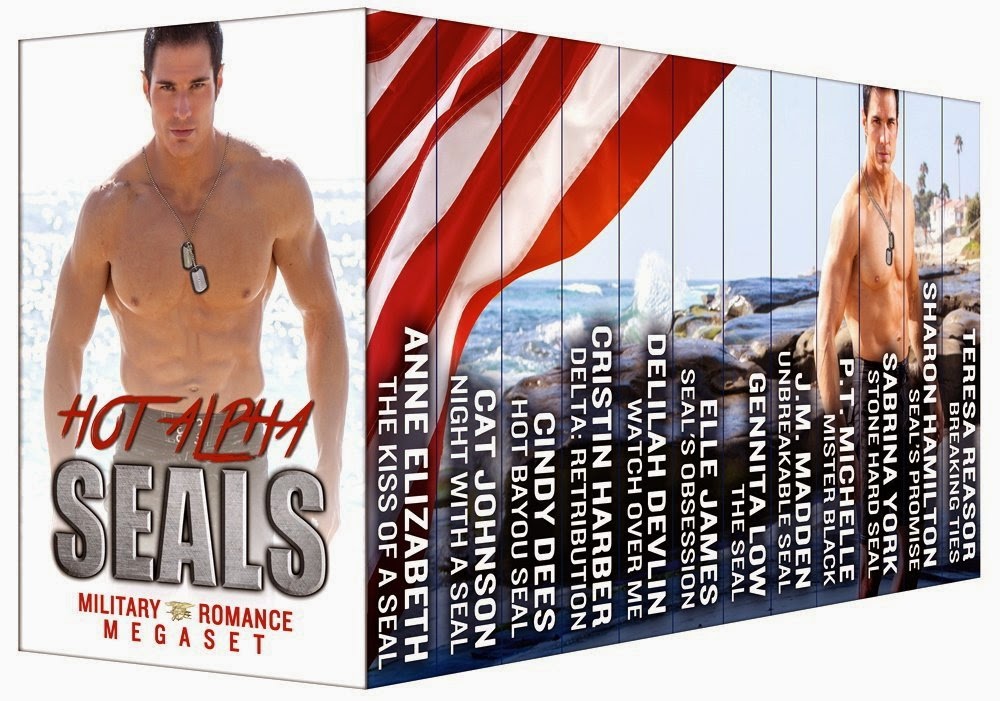 This book is part of the Hot Alpha SEAL's: Military Romance MEGA set that will be out on July 22, 2014 but is available for pre-order at Amazon.

THE KISS OF A SEAL by Award-winning Author Anne Elizabeth -- Jessa Grainger's world is rocked by the kiss of a SEAL, SO-1 Link Tyler. It wouldn't be a problem for an ordinary person, but being a Navy Consultant working on the Amphibious Base as well as being engaged to a SWCC man make the situation very sticky.

NIGHT WITH A SEAL (Hot SEALS #1) by New York Times & USA Today bestselling author Cat Johnson --When navigating military red tape begins to present more challenges than the enemy, it makes SEAL Jon Rudnick question his future. So does Alison Cressly, the one woman he can't get out of his head.

HOT BAYOU SEAL by Award-winning author Cindy Dees -- SEAL Ford Alambeaux is a busted up SEAL on his way out of the teams. Trina Zarkos is being tossed out of SEAL training like every other female candidate...until they're thrown together on a way off-book mission to see if she can play with the big boys or not.

DELTA: RETRIBUTION by USA Today bestselling author Cristin Harber -- Fallen Navy SEAL and Titan Group's Delta recruit Trace Reeves wants nothing more than a one-night stand to forget that his twin brother was killed-in-action. But when his one-time fling becomes his high value target, the lines blur between her rescue mission and saving himself.

WATCH OVER ME (An Uncharted SEAL story) by New York Times and USA Today bestselling author Delilah Devlin -- Deke Warrick's unsanctioned detail is to keep tabs on a congressman's niece while she vacations in the Caribbean. He's determined to keep his distance, from the beautiful Nicky Martir--until she's snatched from their hotel room.

SEAL'S OBSESSION (A Take No Prisoners story) by New York Times and USA Today bestselling author Elle James -- Mission: Halt pirate activities off the coast of Honduras. SEAL TEAM 10's Jack Fischer goes undercover as a deck hand on a medical boat where he finds himself falling for the dedicated Dr. Natalie Rhoades.

The SEAL (a Sex, Lies & Spies novella) by USA Today bestselling author Gennita Low -- Mari Lords is tasked by her father to steal the seal that is an important clue in a round-the-world treasure hunt called The Game. When her opportunity comes during a party, she finds another kind of SEAL, Angel Marcello.

UNBREAKABLE SEAL by USA Today bestselling author J.M. Madden -- Maxwell Tate fights against a psychotic dream world, until he no longer knows what's real. Lacey Adams knows she can't save all of her cases, but can she salvage the unbreakable SEAL?

MISTER BLACK A Billionaire SEAL Story, Part 1 (In the Shadows) by Award-winning author P.T. Michelle --He is Black: a deadly enforcer and masterful seducer. I am Red: a justice bleeder and willing participant. When our secrets converge in a passionate encounter, stepping out of the shadows just might be worth the risk.

STONE HARD SEAL by Award-winning author Sabrina York --When Ryder "Stone" Maddox's meets Lily Wilson--a senator's daughter who is definitely off-limits--he's determined to keep his distance, despite her irresistible allure. But Lily has plans of her own...to put his heart of stone to the test.

BREAKING TIES (a SEAL Team Heartbreakers story) by bestselling author Teresa Reasor -- Navy SEAL Oliver Shaker is blindsided when he learns that not only does his wife, Selena, have a life-threatening illness, but she's also pregnant, stretching their marriage to the breaking point.