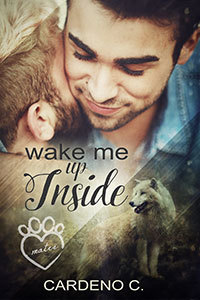 Wake Me Up Inside, C. Cardeno
Mates #1
A powerful Alpha wolf shifter and a strong-willed human overcome traditions ingrained over generations and uncover long-buried secrets to fulfill their destiny as true mates.

Regarded as the strongest wolf shifter in generations, Alpha Zev Hassick is surprised and confused by his attraction to his best friend. His very human, very male best friend. A male shifter has to mate with a female shifter to keep his humanity, so shifters can't be gay. Yet, everything inside Zev tells him Jonah is his true mate.

Maintaining a relationship with the man he has loved since childhood isn’t easy for Jonah Marvel, but he won’t let distance or Zev’s odd family get in their way. When unexplained ailments begin to plague Jonah, he needs to save his own life and sanity in order to have a future with Zev.

Zev and Jonah know they're destined for each other, but they must overcome traditions ingrained over generations and long-buried secrets to fulfill their destiny.

REVIEW:
I started this book last night and was awake way past my bedtime because I just could not put it down. The meeting between Jonah and Zev as toddler and pup had to be one of the sweetest beginnings I have ever read. Their courtship, which neither realized was happening, was endearing and drew me into the the story so quickly I couldn't believe how quickly I cared about these two people.

I always know it's a good book when I find myself talking to the characters. I was so frustrated with what the separation was doing to both Zev and Jonah that I was yelling, "Just tell him already" a couple of different times.

A very unique premise and a story that was wonderful and sexy to read. 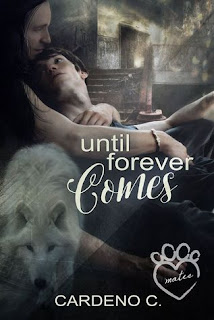 Until Forever Comes
Mates #2
A sensitive wolf shifter and a vicious vampire challenge history, greed, and the very fabric of their beings in order to stay together until forever comes.


Plagued by pain and weakness all his life, Ethan Abbatt is a wolf shifter who can’t shift. Hoping to find an honorable death by joining his pack mates in a vampire attack, Ethan instead learns two things: draining his blood releases his pain and his wolf, and he has a true mate—a vampire named Miguel.


Over four centuries old, strong, powerful, and vicious, Miguel Rodriguez walks through life as a shadow, without happiness or affection. When a young shifter tells Miguel they're true mates, destined to be together, Miguel sends him away. But Ethan is persistent and being with him comes so naturally that Miguel can't resist for long. Their challenge is staying alive so they can be together until forever comes.

REVIEW:
Stubborn has a name and it is Ethan Abbatt. Once he figured out that Miguel was his true mate he wasn't going away no matter what anyone else said....even Miguel.

Miguel was savage and ruthless with everyone but Ethan and that dichotomy made me fall for his character.

I have to say after two books, this one being a prequel to Wake Me up Inside, that if the shifters don't make more of an effort to integrate, their species as a whole isn't going to survive. And while the main theme may be forbidden but true love the more important lesson is acceptance and adaptability. And in that the shifters could learn from both the humans and the vampires.

Lots of sexy, sweet scenes and I have to say a nice change in that the older more experienced very alpha male didn't necessarily take the lead in the bedroom. And on a side not Katie totally cracked me up...she had no boundaries. LOL

My favorite part was the epilogue, seeing how the two stories tied together. I hope there are more stories planned in the future and that the shifters learn to tolerate difference. 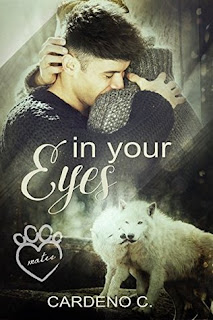 In Your Eyes
Mates #3
Two very different men with a tumultuous history must overcome challenges from all sides and see past their society’s rules to realize they are destined for one another.

Raised to become Alpha of the Yafenack pack, Samuel Goodwin dedicates his life to studying shifter laws, strengthening his body, and learning from his father. But despite his best efforts, Samuel can’t relate to people, including those he's supposed to lead.

When Samuel meets Korban Keller, the son of a neighboring pack's Alpha, he reacts with emotion instead of intellect for the first time in his life. Resenting the other shifter for throwing him off-balance, Samuel first tries to intimidate Korban and then desperately avoids him. What he can't do is forget Korban's warm eyes, easy smile, and happy personality.

When a battle between their fathers ends tragically, Samuel struggles to lead his pack while Korban works to break through Samuel’s emotional barriers. Two very different men with a tumultuous history must overcome challenges from all sides and see past their society’s rules to realize they are destined for one another.


REVIEW:
I am a big fan of this series and was very excited when I saw there was another book. This is one of those series where if you read all of the books it will add to your enjoyment, but it's not required to understand the world.

It took me a while to come around to liking Samuel. He seems so suspicious of everything and everyone that he is very off putting at first. But once I understood he was basically an introvert in a position that is built for an extrovert I got how relating to people was difficult for him. He needed Korban to help balance him.

Korban is so trusting of the bond that he knows he and Samuel have, even though he knows that Samuel isn't aware of it. I laughed every time he talked to Samuel and basically made him have a conversation knowing how uncomfortable he was making Samuel. Korban literally puts his life in Samuel's hands, hoping to finally get Samuel to see what Korban is to him.

This story is told in first person from Samuel's point of view, so we see the struggle he goes through to be the best Alpha for his pack, all while doubting his ability.

We get a bit from previous characters, but this story is mainly about the two MC's and the trouble between their two packs. I would love to see all of the m/m mates come together in the next story to try and bring the truth about matings into the open.

Once again the author has given us a story of love that didn't come easy but was so worth the effort.

Short Bio: Cardeno C. - CC to friends - is a hopeless romantic who wants to add a lot of happiness and a few "awwws" into a reader's day. Writing is a nice break from real life as a corporate type and volunteer work with gay rights organizations. Cardeno's stories range from sweet to intense, contemporary to paranormal, long to short, but they always include strong relationships and walks into the happily-ever-after sunset.

These books were given to us by the author. Many thanks.