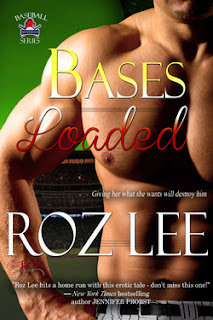 Antonio Ramirez is ready to leave his wild reputation behind in New York and adopt a more respectable life with the Texas Mustangs. When he spies the woman of his dreams at a Fundraiser—its love at first sight. Convincing Clare Kincaid that he’s sincere is harder than he expected. Giving Clare what she wants could wreck his career and compromise his feelings for her.

When super sexy Antonio Ramirez approaches her, Clare is sure he’s playing a cruel game, but the Mustangs new Center Fielder won’t take no for an answer. She might be convinced of his sincerity if only he would invite her to play the one game she longs to play.

Roz Lee delivers a home run with her latest Mustangs Baseball series installment, Bases Loaded. You have to appreciate an author who can give her readers just enough of the right elements - whether you like a little kink with your romance or a little romance with your kink - this series will capture your interest and keep it long past book 1!

Antonio Ramirez relocates to Texas to revamp his very kinky bad-boy image. Clare Kincaid captivates him right off the bat. He is everything she ever dreamed of. She is nothing like he's ever known. What's a curvy girl to do when a baseball Adonis wants to work his wicked ways with her? Play ball, of course!

Perhaps the reason Ms. Lee is so successful at creating erotic romances lies in her ability to create real, multi-dimensional characters that speak to the reader. Antonio exudes sex appeal, enough to have you reaching for your fan while you read. But he is also empathetic - he wants to make Clare realize her physical appeal, so much so that he is willing to suppress that dark side of him that enjoyed his roll in the Bases Loaded club and ultimate allow her to indulge his passion with him. Clare shows both fragility in her fears and strength in her resolve. While not every woman imagines reclaiming her sense of self confidence by indulging in a single night of wild hot monkey sex with four gorgeous athletes capped off with a trophy piercing - you have to give it to her, she wants what she wants. This pair are unlikely but their connection is magical.
Full of well written dialogue and plenty of seriously sexy scenes, Bases Loaded kept me up past bed time and turning page after page. I'm no fan of baseball but I'll definitely read any sports story if it's penned like Roz Lee's!

RATING: Four Chocolate-Dipped Strawberries and a big ole glass of ice water to cool down after this one!

Be sure to make a comment to win your own copy of Inside Heat!!!